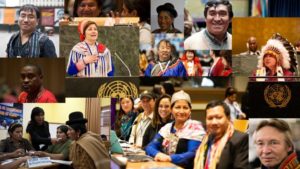 Large dams and mining activities have caused forced displacement of thousands of indigenous persons and families without adequate compensations in many countries. Several communities have been moved out of national parks against their will, while tourist development in some countries has resulted in the displacement of indigenous people and their increasing poverty.[4]

Forced evictions and the dispossession of lands have particularly severe impacts on indigenous women, who, as a result, often have an increased workload as they must walk long distances to find alternative sources of water or fuel wood, or are driven out of income-earning productive activities and into a situation of economic dependence on men. [5]

Indigenous peoples in Africa’s Kalahari Desert are forced to live around government drilled bores for water and depend on government support for their survival due to rising temperatures, dune expansion and increased wind speeds which have resulted in a loss of vegetation, and negatively impacted cattle and goat farming practices. [6]

Right here in the United States, where the Native American population totals 6.79 million (approximately 2% of the U.S. population), they face threats from federal and state governments related to land-use and resource extraction. Native Americans have the highest poverty rate of any major racial group, with one in four people living below the poverty line.[7] The Journal of Science found that Native American tribes were systematically forced into less-valuable areas and were excluded from key economic sectors, such as the energy sector. Modern indigenous land In the U.S. is therefore at an increased risk from climate change, including extreme heat and droughts.[8]

On this International Day of the World’s Indigenous Peoples, take some time to learn about the plight of those who loved this land before you. Be an ally and protect the earth and the history of indigenous peoples: https://www.globalcitizen.org/en/content/indigenous-peoples-day-native-americans-action/.