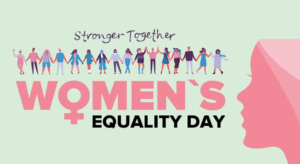 In 1971, Representative Bella Abzug (D-NY) championed a bill in the U.S. Congress, which passed in 1973, to designate August 26 as “Women’s Equality Day.” The observance of this day commemorates the passage of the 19th Amendment, granting women the right to vote, and calls attention to women’s continuing efforts toward equality. Although the 19th Amendment was ratified on August 18, 1920, it was not until its certification by proclamation on August 26, 1920, that it was officially enacted.

This historic event was the culmination of a massive, peaceful civil rights movement by women that had its formal beginnings in 1848 at the first women’s rights convention held in Seneca Falls, New York. The Women’s Suffrage movement was successful because women worked together with men to promote change – they demanded that laws written by and for men be reformed to include women. Women’s rights groups aptly pointed out the hypocrisy of fighting for democracy in Europe while denying it to half of the American citizenry.

It is important to point out that although the 19th Amendment was ratified in 1920, millions of women across the country were still unable to exercise their right to vote. Though these women rallied alongside the white suffragists, many women of color remained disenfranchised until the mid-20th century – Native American women (1924); Chinese American women (1943); and Japanese and other Asian American women (1952). As late as 1962, some states still prevented women of color from voting on contrived grounds, such as poll taxes, literacy tests, voting ID requirements, and intimidation and campaigns of violence. It was not until the passage of the Voting Rights Act of 1965 — 45 years after the enactment of the 19th Amendment — that black women were able to exercise their right to vote without restrictions.

Each year, the president issues a proclamation on Women’s Equality Day. On August 26, 2021, President Biden’s Proclamation read, in part:

“Today, as we celebrate Women’s Equality Day, we recognize the pioneers whose fight for suffrage paved the way for future generations of leaders — and we recognize our duty to continue that fight to ensure that our daughters can enjoy the same rights and opportunities as our sons. Let us honor the efforts of trailblazers and barrier-breakers with meaningful action to promote gender equality and make exercising the right to vote more equitable and accessible for all.”