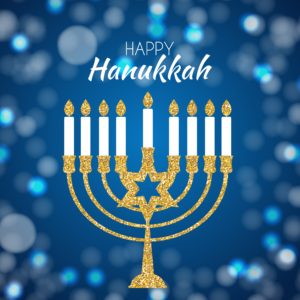 Hanukkah is a Jewish holiday, often referred to as the “Festival of Lights.” Hanukkah is celebrated for eight days and nights, starting on the 25th of the Jewish month of Kislev, which may fall anywhere between late November and early December on the secular calendar. In 2022, Hanukkah will be celebrated from December 18th-26th. For eight nights, families say prayers and then light candles in an eight-branched candelabra called a menorah. Most families also serve special holiday foods, sing songs, play games, and give gifts including Hanukah gelt (chocolate coins).

In the second century BCE, the Holy Land was ruled by the Seleucids (Syrian-Greeks), who tried to force the people of Israel to accept Greek culture and beliefs instead of mitzvah observance and belief in God. Against all odds, a small band of faithful but poorly armed Jews, led by Judah the Maccabee, defeated one of the mightiest armies on earth, drove the Greeks from the land, reclaimed the Holy Temple in Jerusalem and rededicated it to the service of God. When they sought to light the Temple’s Menorah (the seven-branched candelabrum), they found only a single cruse of olive oil that had escaped contamination by the Greeks. Miraculously, they lit the menorah and the one-day supply of oil lasted for eight days, until new oil could be prepared under conditions of ritual purity. To commemorate and publicize these miracles, the sages instituted the festival of Chanukah.

There are at least 16 different ways to spell Hanukkah. There are many different translations of the word, and while some start the word with the “ch” sound (as it would be pronounced in Hebrew), others prefer the anglicized “h” sound. Americans often choose to spell it as Hanukkah because that is the official spelling from the Library of Congress.

Hanukkah is a time for celebration, but it is important to be vigilant about rising antisemitic incidents in the United States and abroad. According to an April 2022 report by the Anti-Defamation League, a Jewish anti-hate monitor, there were 2,717 antisemitic incidents in the US last year – a 34% increase from 2020 and the highest total since the group began tracking such incidents in 1979. At a recent White House Hanukkah celebration, Attorney General Merrick Garland told the crowd, “[t]ogether we must stand up against the disturbing rise in antisemitism. And together we must stand up against bigotry in any of its forms . . . [m]ay we never stop working to ensure that Americans will always be able to gather as we are doing tonight – to light the menorah.”