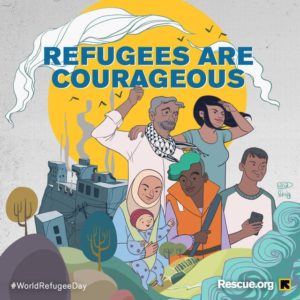 What is World Refugee Day?

World Refugee Day falls each year on June 20 and is dedicated to refugees around the globe. World Refugee Day was held globally for the first time on June 20, 2001, commemorating the 50th anniversary of the 1951 Convention relating to the Status of Refugees. World Refugee Day shines a light on the rights, needs and dreams of refugees, helping to mobilize political will and resources so refugees can not only survive but also thrive.

According to the UN, every minute 20 people leave everything behind to escape war, persecution or terror. There are several types of forcibly displaced persons:

A refugee is someone who fled his or her home and country owing to “a well-founded fear of persecution because of his/her race, religion, nationality, membership in a particular social group, or political opinion”, according to the United Nations 1951 Refugee Convention. Many refugees are in exile to escape the effects of natural or human-made disasters.

Asylum seekers say they are refugees and have fled their homes as refugees do, but their claim to refugee status is not yet definitively evaluated in the country to which they fled.

Internally Displaced Persons (IDPs) are people who have not crossed an international border but have moved to a different region than the one they call home within their own country.

Stateless persons do not have a recognized nationality and do not belong to any country.

Statelessness situations are usually caused by discrimination against certain groups. Their lack of identification — a citizenship certificate — can exclude them from access to important government services, including health care, education or employment.

Returnees are former refugees who return to their own countries or regions of origin after time in exile. Returnees need continuous support and reintegration assistance to ensure that they can rebuild their lives at home.

Rights of Refugees Under 1951 Convention:

The 1951 Convention contains a number of rights, including:

The right not to be expelled, except under certain, strictly defined conditions;

The right not to be punished for illegal entry into the territory of a contracting State;

The right to work;

The right to housing;

The right to education;

The right to public relief and assistance;

The right to freedom of religion;

The right to freedom of movement within the territory;

The right to be issued identity and travel documents.

According to the UNHCR, there are 65.3 million forcibly displaced people around the world. More than 21 million of these people are refugees and 10 million are stateless.

On average, 42,500 people per day flee their homes to seek protection within the borders of their own country or other countries.

Of the 20 million refugees worldwide, 51% are under the age of 18. This is the highest number of child refugees since World War II.

The three largest refugee crises at this time are Syria, Ukraine and Afghanistan. This article gives a short overview of the top 10 crises currently occurring: https://www.concernusa.org/story/largest-refugee-crises/