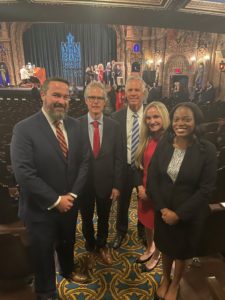 Guerra King lawyers joined the large crowd of well-wishers at the Tampa Theatre on July 21 for the unveiling of Senior U.S. District Judge Virginia Covington’s portrait.  The ceremony marked Judge Covington’s 18 years on the federal bench as well as her service as a state and federal prosecutor whose cases literally took her around the world.  Speakers at the event recounted Judge Covington’s childhood in Tampa, her Cuban-American roots, and her service as the first Hispanic district court judge in the Middle District of Florida.