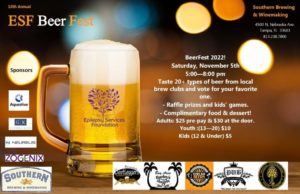 Epilepsy Services Foundation’s BeerFest event first began in 2012 and was originally the idea of two former board members, Dominique Heller and Angela Brooks. At the time, Dominique Heller was an attorney for Guerra King. Guerra King has been involved with ESF since Peter King joined the board of directors in 1998 after losing his sister to an epileptic seizure. Since then, Guerra King has had many other employees join the board and carry the torch for an unbroken string of 24 years of affiliation with the organization. Guerra King is a proud sponsor of BeerFest each year and supplies the beer mugs, which is in addition to its sponsorship for Epilepsy Awareness Walks held in Tampa and Pinellas counties.

BeerFest is an opportunity to bring the community together to taste beers from local home brew clubs and vote on their favorite brew, enjoy a complimentary BBQ buffet and dessert, live music, raffle and more! The money raised from the event helps support the programs and services of Epilepsy Services Foundation for children, teens and young adults with epilepsy and their families in west central Florida.

Epilepsy Services Foundation…. Where kids can be kids. Where families find support. Where hope endures.